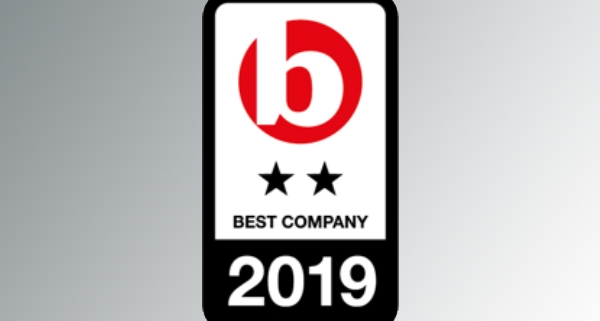 Matrix Networks has been awarded a 2-star accreditation and recognised as ‘Outstanding’ in its commitment to workplace engagement, in the 2019 ‘Best Companies to Work For’ survey.

The accreditation has been awarded based on feedback provided by the Company’s employees and is the second highest of four levels of workplace engagement, representing organisations which are striving for the top.

Surveys were issued earlier this year by Best Companies to Matrix Networks’ employees based at its three offices in Northampton, Slough and Warrington. The results of this feedback, which were received from 76% of invitees, were then considered alongside information gathered about the business, to determine an overall Best Companies Index (BCI) score.

BCI scores generated through the process are compiled by Best Companies and ranked for inclusion in ‘The Sunday Times Best Companies to Work For’ lists, to be published in the new year

“This is the first time we’ve taken part in a national employee engagement survey and we’re immensely proud to have achieved a 2-star accreditation,” said Rob Sparkes, Matrix Networks Managing Director. “As we said in our submission, we employ people who have the right skills to do the job, but it’s equally important that they’re a good match for the culture of our business.

“We like to think we’re a good company to work for, so it’s nice to know our employees agree and so does this national accreditation body.”

Matrix Networks will have to wait until the new year to find out if it’s successfully made it on to either the regional or national Best Companies to Work For lists. The results are due to be published in The Sunday Times and other partnering media outlets in February 2019.

This site uses cookies. By continuing to browse the site, you are agreeing to our use of cookies.

We may request cookies to be set on your device. We use cookies to let us know when you visit our websites, how you interact with us, to enrich your user experience, and to customize your relationship with our website.

Click on the different category headings to find out more. You can also change some of your preferences. Note that blocking some types of cookies may impact your experience on our websites and the services we are able to offer.

These cookies are strictly necessary to provide you with services available through our website and to use some of its features.

Because these cookies are strictly necessary to deliver the website, you cannot refuse them without impacting how our site functions. You can block or delete them by changing your browser settings and force blocking all cookies on this website.

These cookies collect information that is used either in aggregate form to help us understand how our website is being used or how effective our marketing campaigns are, or to help us customize our website and application for you in order to enhance your experience.

If you do not want that we track your visist to our site you can disable tracking in your browser here:

We also use different external services like Google Webfonts, Google Maps and external Video providers. Since these providers may collect personal data like your IP address we allow you to block them here. Please be aware that this might heavily reduce the functionality and appearance of our site. Changes will take effect once you reload the page.